Singing Woodford festival's praises ... and that's not all, folks

Writer JJ Rose camped out for five days at Queensland’s annual Woodford Folk Festival, not expecting to like it too much. In spite of a few ‘outdoorsy’ challenges for him and his family – and an unfortunate ‘crowd coward’ moment, plus missed opportunities – Woodford’s ‘folksiness’ and intimate musical performances (well, even though in 2019 the festival had 2000 performers. 35 venues and 438 acts) compellingly won the Rose family over. 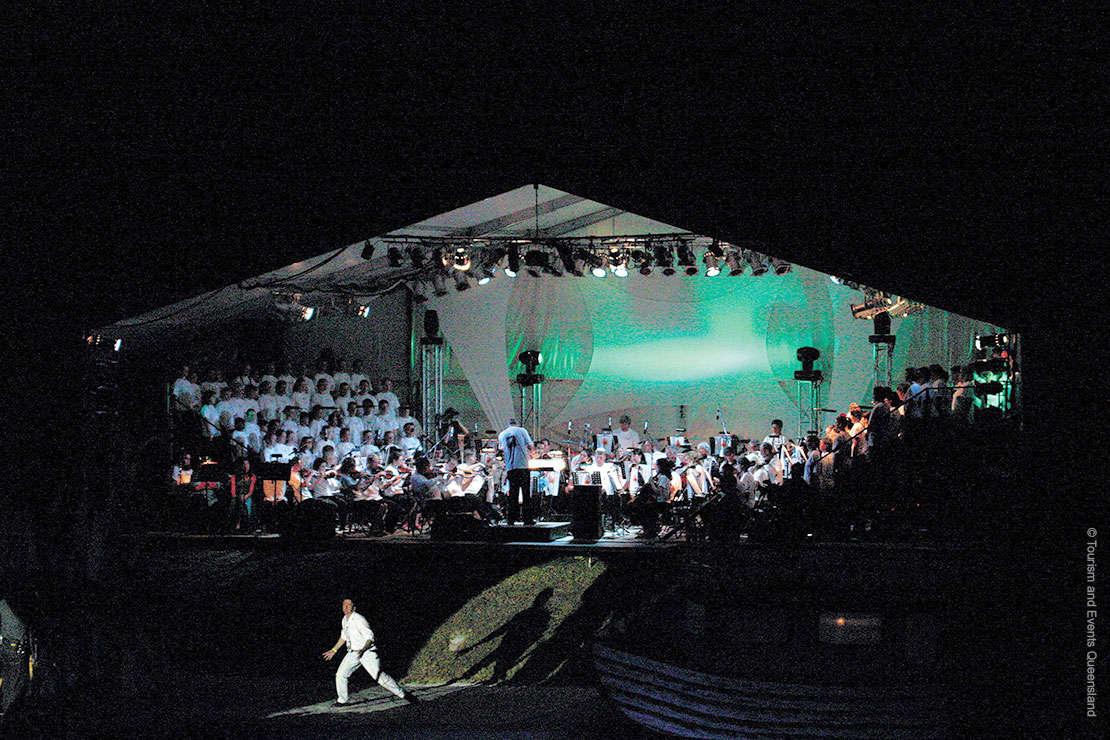 FOR SOMEONE who takes to camping like a pelican takes to the desert, five nights at the Woodford Folk Festival loomed as a daunting post-Christmas event.

Amid various early disasters, I thought about heading home after an hour. I’m glad I didn’t.

If you’ve never been to Woodford, it’s hard to envisage. Some 30 venues, hundreds of retail stalls and eateries, a kids festival, something like 100,000 people turning up over six days between December 27 and January 1 each year, wall-to-wall entertainment from morning to well into the night. And the cantankerous Queensland summer weather.

All crunched together on a plot of land called Woodfordia, about a one-hour drive north of Brisbane.

The most difficult-to-imagine aspect is that it works.

Sure, we can overstate this. It’s only a few days etc. But all of us have seen how massed humanity can go ugly. Woodford, at least from what I could see this year, never did. Rules were sensible and common sense was in abundance. It’s a credit to all.

But, yes, it is a cultural festival, not an experiment in political philosophy. So what about the actual entertainment?

I probably saw about 40 acts at this year’s Woodford. Most were good, some were very good, one or two were truly memorable. A few were disappointing.

Personal highlights were Christine Anu with her – for me – tear-jerking set of pure voiced stunners. After days of rain she sang Sunshine on a Rainy Day and the blue sky broke through the clouds – I kid you not – and the rain only intermittently returned after that.

Neil Murray played Bill’s Bar, a small venue perfect for his intimate approach, and I felt I knew him as family (so much so, I spontaneously waved to him when I saw him packing his car to leave. He waved back).

Kate Miller-Heidke was delightfully kooky and listenable, like an opera singer with Tourette’s. I caught her evening set at The Grande and couldn’t believe what I was hearing, both the acrobatic voice and the in-between-song profanity – a story about farting with nerves while playing with the Violent Femmes the night before – making her one of a kind. Quirky and fabulous.

The Cat Empire rocked the Amphi and introduced my 11 year-old daughter to the delights of being on shoulders (mine) in a mosh pit. When they stuck to playing actual songs, the Empires audience buzzed and bounced. When they indulged overly in drum solos or in clever musical tricks, they seemed to lose us a bit, milling instead of moshing.

Christine Salem and band tattoo’d New Year’s day with pulsating African tempos. A native of La Reunion, an island in the Indian Ocean, she and two amazing drummers hammered a largely listless and hung-over New Year’s Day crowd – although some brave and possibly still partying souls braved the dance dirt in front of stage – at the Concert. It was unfortunate scheduling as she was better than the sleepy vibe in the tent suggested. The drumming alone near blew my head off.

Tibetan Tenzin Choegyal was a ubiquitous presence, somewhat colonising the major folk venue, The Folklorica. Both on his own and with other musos, memorably a fusion session with celloist Katherine Philp, his voice and passion lifted the roof. He sang the mountains and the plains of Tibet, and its pain and strength into being.

Shigeru Yomei Nakajima played memorising shakuhachi that drew me in as I wandered in an early morning search for caffeine. I had to stop and take it in. His breathy runs and the fanning, tumbling melodies had me back in the Zen hostel I stayed at in rural Japan many years ago.

Nakho and Medicine for the People accompanied us for our New Year’s Eve (NYE) ring in. I found them disappointing.

The potential is there, though, and my wife and friends who caught them the night before, when I was elsewhere, raved about them. They too felt they fell short on NYE.

But, part of the problem was that my daughter at her first real NYE gig got pinched hard by some unknown dickhead behind us and we had to shuffle from our hard-earned prime spot to the back, her in tears, as a result. Certainly didn’t help.

Bertie Blackman at the The Amphi too (and I am a fan) failed to work for me, her set sounding a little tired and dated.

While on the subject of NYE, the three-minute silence is one of the most stunning innovations I have come across at any event for a long time.

At 11.30pm on NYE, the whole Woodfordia ship and all who sail in her stop, and all is quiet. Candles are handed out and lit.

Those images of tens of thousands of people scattered across a vast complex remaining respectfully silent, seraphic faces shimmering in the flickering light, crickets chirruping into the silence and at a half moon parting the clouds like curtains, will stay with me forever.

Despite this, Woodford's NYE scheduling seemed a little off. Lots of contemplative, meditative acts and relatively few bona fide party acts in the early hours of NYE seemed an odd choice.

Placing someone like Christine Salem, say, on New Year’s Day, not the night before, or Pocketlove, seemed an opportunity missed.

I expect the earthy ochre tones of the Tjintu Desert Band and Kylie Auldist’s Bamboos-style soul riffs made the Songlines venue the place, perhaps, I should have been for NYE.

The Amphi’s Hogmanay shindig, fashioning a mix of Celtic acts like Shooglenifty and indigenous supergroup Tjupurru and the Bulldawadda, may also have hit the money.

Maybe I just got it wrong – first timer error perhaps.

ITS A FOLK FESTIVAL, FOLKS

It’s handy to remember Woodford is supposed to be a folk festival. 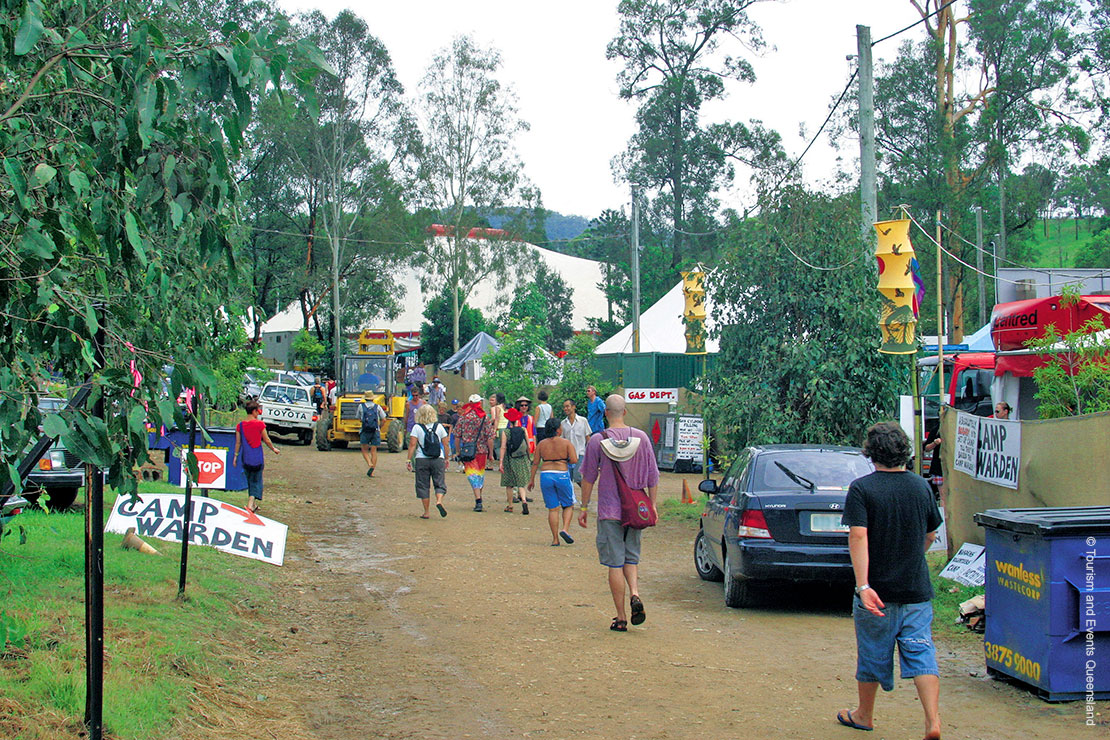 While acts like say, Paper Lions (think 5SOS with Canadian accents), Husky or Sticky Fingers may push the folk genre out of a shape most of us could recognise, the vast bulk of the acts – music, dance, info sessions, circus, vaudeville, spoken-word and so on – could be roped into a folk culture corral.

As such, it is perhaps unfair to expect a rock concert or a dance festival.

Looking at its folk chops, the festival is to be respected. While the balance was perhaps weighted too much to African, and Middle Eastern vibes (this particular festival was co-sponsored by the Moroccan Government, which may explain a bit), with Asian acts, for instance, few and far between, the program is incredible.

It’s a list of such range, depth and quality unlikely to be found anywhere else in the world.

But there are scant negatives to take out of my first Woodford experience. I’ll be back.